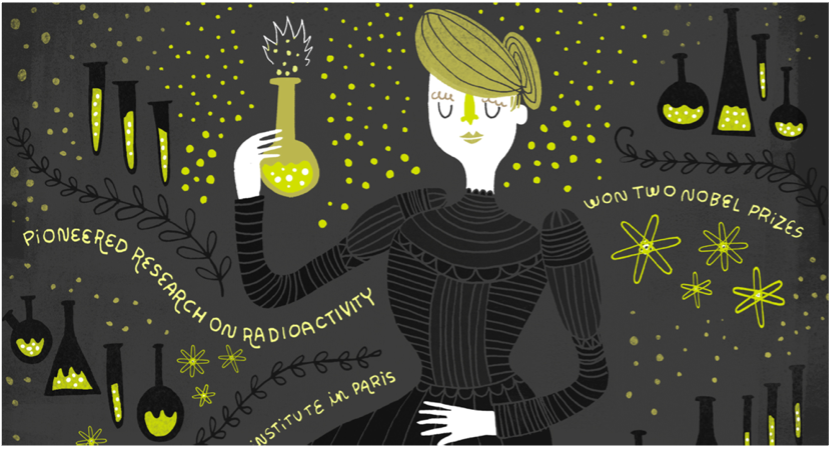 Rachel Ignotofsky is a New York Times best-selling author and illustrator. She is based in Santa Barbara, California where she writes and publishes books about science and history. Rachel has spoken at many companies, bookstores, museums and universities including TedX, NASA and the 2016 Wonder Women in Tech conference. She has also been featured in many online articles and magazines such as Scientific American, Business Insider and JPMorgan. In 2018, Rachel gave a TedTalk on her recently published book “Women in Science” where she shared her experience and thoughts on the underrepresentation of women in STEM.

In 2016, she published her most popular book: “Women in Science – 50 fearless pioneers who changed the world” with the aim of rewriting the history of science to be more honest and inclusive. Rachel drew her own illustrations with the hope of making her message both inspiring and accessible for young women and students alike. Her book starts with Hypatia (the first female philosopher who taught Astronomy in ancient Alexandria) and ends with Maryam Mirzakhani (the first woman to be awarded a Fields Medal in Mathematics). She also includes less celebrated and praised female scientists such as Gerty Cori (the first woman to be awarded the Nobel Prize in Physiology) and Sylvia Earle (the first female scientist of the US National Oceanic and Atmospheric Administration). Rachel also includes women that pioneered the Civil Rights Movements, Space Race, World War II and Suffragettes Movement. In her TedTalk, she shared three stories of three different female scientists. Although they each encountered sexism, racism and classism, they continued to lead and make discoveries which has shaped the world we live in today.

The first scientist, Mary Anning, lived during the Victorian era. She did not have access to education and was prohibited from publishing books because of her gender. However, Mary Anning was very fascinated with fossils and she was particularly interested in the theory of extinction. She found the first full skeleton of the Plesiosaurus dinosaur but the scientific community refused to accept her work and rumours were spread saying the fossil was fake. Whilst this was happening, other male palaeontologists used her findings as evidence for their own work. The second scientist, Lise Meitner, discovered the element Protactinium with her lab partner Otto Hahn. She worked with radioactive elements and was on the brink of discovering the theory of nuclear fission until Hilter rose to power. She had to secretly continue her work as she was Jewish and Lise fled to Sweden for safety as the Holocaust began. Sadly, Otto was awarded the Nobel Prize for discovery of the radioactive element without Lise. The third scientist, Katherine Johnson, worked on the first human spaceflight mission: Project Mercury. Take a look at this website to watch Rachel’s TedTalk to find out more: https://www.ted.com/talks/rachel_ignotofsky_making_women_in_science_visible

In Rachel’s TedTalk she spoke really strongly about how gender, sexism and racial inequality created a huge divide. Over the history of science, women put in the same amount of work and dedication as their male colleagues but failed to get recognition. Rachel proclaimed that women did not get the credit and respect they deserved therefore with her platform she decided to celebrate and acknowledge these three women and 47 others in her “Women in Science” book. You can check out this book and her other books on her website here: https://www.rachelignotofskydesign.com/

🔷Reflecting back on International Women’s Wee

Islem Rekik is an Assistant Professor of Computer

We are are pleased to welcome Prof. Polina Golland

🔹Join next year's committee! 🔹 Nominations a

In 1951, Henrietta Lacks was diagnosed with aggressive cervical cancer. She visited the John Hopkins Hospital where it...

When I first took science class in elementary school, we learned about the five senses. Maybe not far into the future,...